The nematode worm is a favorite subject of medical researchers, because they are transparent. They are also small, very small, being made up of fewer than 1,000 cells. Under the microscope, it is possible to observe neurons die in real time in this lowly worm.

What makes the nematode worm ideal for Parkinson’s disease research is that it has only 8 dopamine neurons. Yet, at the molecular level, those 8 dopamine neurons are almost identical to the human nervous system. Typically, the nematode worm is treated with a toxin so they can be viewed under the microscope, then sorted for the research purpose at hand. 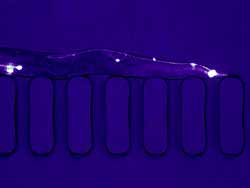 MIT researcher, Mehmet Yanik, has developed a chip that can reduce a typical 6 month job of sorting nematode worms down to 1 month. To understand how the chip works think of a Chicago cattle stock yard where the cattle are off-loaded from railroad cars and sent down a chute. As the cattle progress along the chute different cattlemen along the path will swing a gate to redirect a head of cattle down any one of several chutes. Eventually the entire herd is sorted into different corrals. Now replace the image of cattle with a nematode worms and you have a pretty good idea what Yanik has developed for sorting the little worms.

The whole process is accomplished by ‘herding’ the nematode worm into the chip along with a special fluid. Once inside the chip the worm is pulled along the desired route by a vacuum. This way a worm can be directed to any one of several different chambers.

What is more significant than just being able to sort the worms is that the chip allows the nematode worm to be immobilized so the specific neurons can be examined in real time without the use of any toxins.

This chip offers great potential in research advancement for diseases like Parkinson’s disease where dopamine neurons are known to be involved in the disease, but exactly how the process works is still not fully understood.

Next post: Fibromyalgia seen as a potential $2 billion market