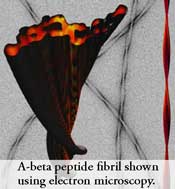 The origins of Alzheimer’s disease is thought to be the result of A-beta peptide (Alzheimer’s peptide) when it clumps together in the brain and forms long fibrils. Whether it is the protein clumps or the fibrils that kill brain neurons is still being debated.

Nikolaus Grigorieff, biophysicist, Brandeis University, along with researchers at Leibniz Institut, Jena, Germany, have successfully created an A-beta peptide 3-D image. Grigorieff, and colleagues, overcame the barrier to determining the structure of A-beta fibrils by generating them in a test tube under conditions that reduce the variability between fibrils, then selecting about 200 images of fibrils that were similar and averaging them on a computer.

Researchers plan to create a 3-D image that shows where all of the amino acids are located in hopes to learn more about the chemical and biological properties of A-beta Fibrils to have a better understanding of their role in Alzheimer’s disease.

Previous post: Why depression medication fails to work for some patients