Memory loss in Alzheimer’s associated with loss of receptor cells

Ironically, researchers ‘think’ they have an understanding of how we ‘think’ and how memory is created. When it comes to the brain it is a matter of speculation of how our metaphorical gears work. 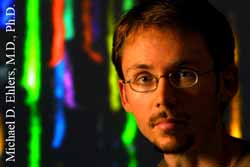 Recent research by Duke University’s Medical Center neurobiologist, Michael Ehlers, M.D., Ph.D., has filled in one more piece of the puzzle. His work concerns receptors that are considered to be essential in learning and retaining memories.

Thoughts create electrical impulses, which in turn travel to a dendritic spine. Imagine the bare roots of a bush and you get the idea of what a dendrite looks like. Now imagine 2 bushes with bare roots with the roots intertwined, except for one magical thing, no two roots are touching.

The space between the roots is called the synapse. Constantly moving in the synapse are molecules known as receptors. It is these receptors that play an important role in Ehlers discovery.

While these findings should be able to help neurobiologists to better understand learning and memory, Ehlers believes that it helps to explain disorders, such as Alzheimer’s disease.

Animal studies indicate that in the early phases of Alzheimer’s disease, before symptoms appear, the dendritic spines gradually lose their ability to recycle the receptors. Without the recycling of receptors there is an obvious explanation for why Alzheimer’s patients have a reduced cognitive ability.

Next post: Nutritional supplement used in clinical trail for Parkinson’s